I really have fallen in love with cooking. I’ve always enjoyed it at least somewhat but I think I used to look at it as more of something I had to do vs something I wanted to do.  These days, I spend a lot of time looking up recipes, trying new foods and creating interesting meals. I have been cutting back on animal products and dairy. I watched the documentary Forks Over Knives and it gave me that push I needed!  So, I have been reading a lot of vegetarian, vegan and even raw blogs while looking up recipes. It’s actually really fun! I have tried out quite a few and honestly, have loved them all.  I thought I’d share a few pictures of what I’ve been eating and if there is a recipe online, I will link it.  I like seeing what other, healthy, people eat!  It’s a great way to get ideas for yourself.

Here are some things I have made in just the past week, either vegan or vegetarian. 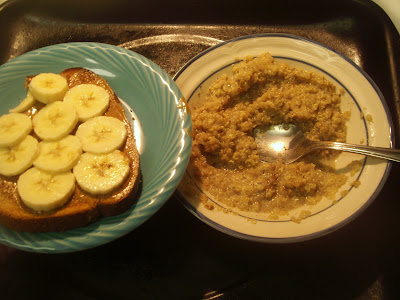 Vegan breakfast of whole grain toast with almond butter and sliced banana as well as a bowl of quinoa made with almond milk, chia seeds, agave nectar and cinnamon.  This is very high in protein and fiber! 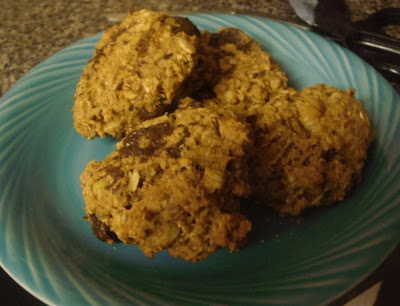 Almost vegan cookies. The dark chocolate had milk in it but if you bought vegan chocolate, these cookies would be vegan. Other ingredients include oats, whole wheat flour, brown sugar, walnuts and peanut butter. 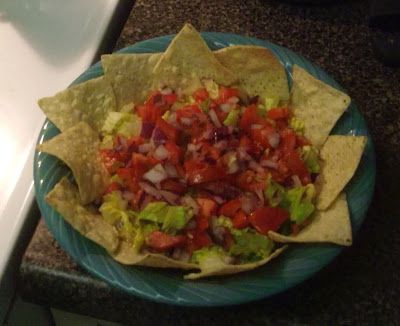 I made vegan queso using nutritional yeast and then created a layered dip. There are black beans mixed in with some seasonings and mashed then homemade salsa, vegan queso, lettuce, tomato and red onion. Avocado would be good too!  This was delicious. Even my husband ate it despite his “I’m not eating fake cheese/meat” protests! I had it the next day as nachos. I poured the leftover vegan queso over some chips and then the dip… so freaking good! I would recommend  buying healthier chips though, haha. 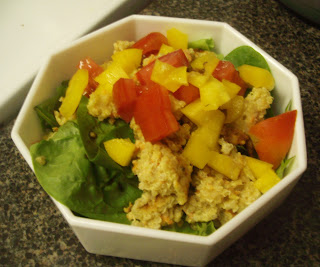 A simple vegetarian salad of spinach, red leaf lettuce, arugula, leftover quinoa patties crumbled up, sliced tomato and sliced yellow pepper all drizzled with a bit of red vinegar. Salads are great; I like to add something like nuts, beans or in this case the quinoa to add some more nutrients. 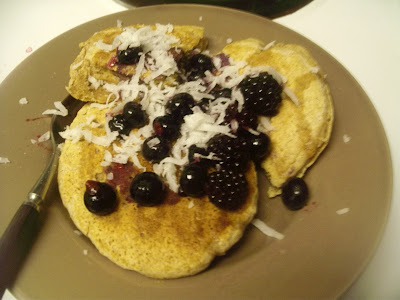 Vegan pancakes! These are whole wheat and topped with mixed berries, agave nectar and coconut. 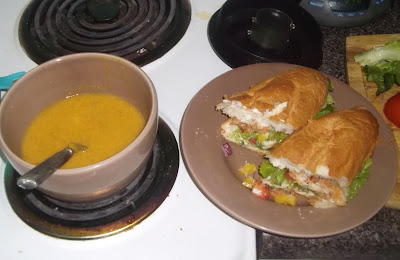 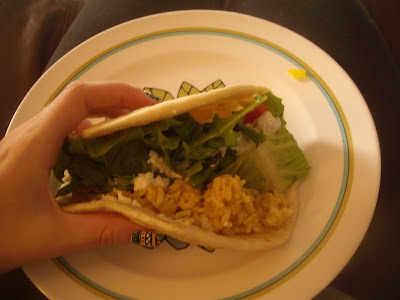 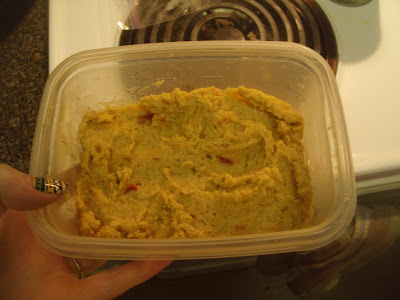 Homemade sun dried tomato hummus. I made mine a bit differently; maybe I’ll post my own recipe later. This is vegan. 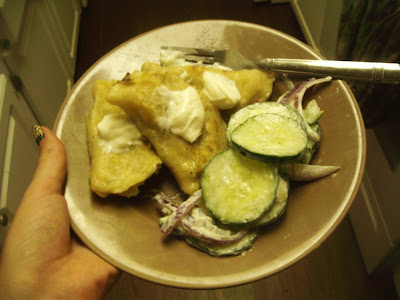 Homemade spinach perogies with a cucumber/onion dill salad. I was very proud of these perogies! I’d never made them from scratch before but they were delicious. I used a vegan recipe so there is no butter, making these a healthier perogie! I did not have nutritional yeast at the time though so I used real cheese, making mine vegetarian not vegan. 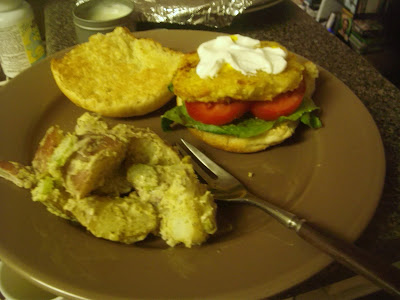 Quinoa burger with vegan dill potato salad. These quinoa patties are delicious!  I’m glad I made a lot because I also have eaten them in wraps and salads plus I froze a batch.  I haven’t managed to find “veganaise” in any stores yet so I had regular mayo, making mine vegetarian not vegan. 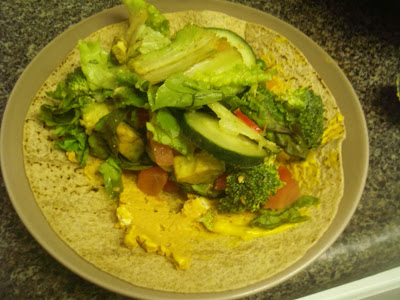 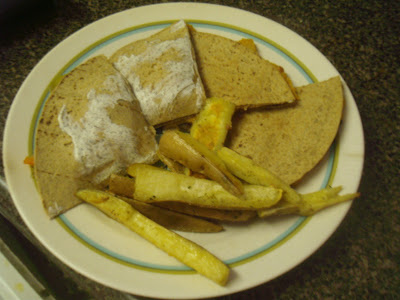 Faux-dillas with yam fries. This is a new favourite of mine. I thought I’d miss the cheese but I don’t! These is a much healthier quesadilla.
Here are some grocery items I’ve bought this past week of super healthy stuff! 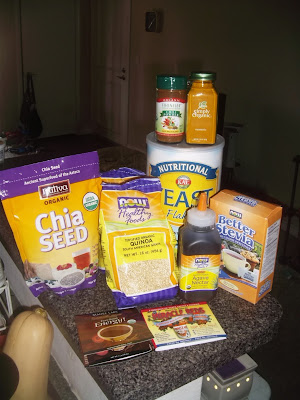 This I ordered from iherb.com. Shipping is free over $40 and if use code APA203  you get $5 off. I received my stuff the very next day! I got chia seeds, quinoa, agave nectar, stevia, nutritional yeast, tumeric and chili powder… all organic. It also came with two free samples. I had a great experience with this site!  The prices were great. If you don’t live near a Whole Foods, I’d recommend going this route. 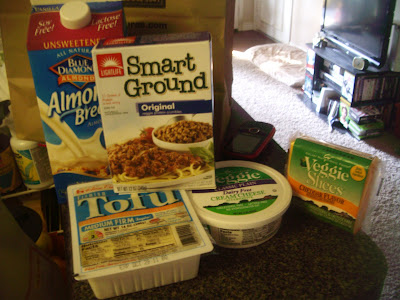 I got this at the commissary so you should be able to find this stuff at most grocery stores. I drink almond milk regularly and love it. I had avoided tofu for a while because soy is so controversial but I figure having it now and then will be good. Now, the vegan meat/cheeses I have not tried! I wanted to try a few. I don’t want to do too many substitutions but it does expand your options. These are all soy based as well so again, I will limit when I eat them. I know you can get ones made from just vegetables but I didn’t see any.  I do make a point to get organic/non GMO soy products, just as an fyi.
I bought faux ground beef which has 11g of protein per serving and 0 fat! I also got some “cheese” slices in cheddar flavor. 1 slice has 40 calories, 2.5g fat and 3g protein. Last, I bought veggie cream cheese which is dairy-free so it is vegan. 2 tbsp has 90 calories, 9g fat and 1g protein. I was curious how this matched up to regular beef, cheddar cheese and cream cheese!  Original Philadelphia cream cheese is 100 calories, 9g fat and 2g protein per 2 tbsp so very similar.  Tillamook cheddar cheese slices have 110 calories, 9g fat and 7g protein per slice so they have more protein but also more calories and fat than the vegan version. Also, the regular cheese had mainly saturated fat while the vegan cheese and no saturated fat. 80% lean ground beef usually has 231 calories, 14.8g fat and 22g protein per 2oz.  Ground turkey has 130 calories, 8g fat and 15g protein per 2oz.  So, of the three, the faux beef has far less calories and fat but almost as much protein!  Interesting. I think they are great options (assuming I like the taste once I try them!) just not something I’d rely on or eat every day because they are soy based.
I hope you found this interesting. I don’t like to push my beliefs on anyone but I think it is important to share information.  If you want to learn more about the food we eat, check out these documentaries:

Food Matters – Talks a lot about how nutrition is a great form of medicine. It’s very interesting and eye opening!
Food Inc  – Takes a look at US farms and the US food industry. It may make you want to shop organic, at least!
Forks Over Knives  – Talks about research which shows how dairy and animal products are directly linked to many health problems, even cancer. It doesn’t say “go Vegan” or even use the word vegan but it does stress the important of a plant/grain based diet. It’s really really interesting/surprising.
Fat, Sick and Nearly Dead – A very inspiring story about juicing/juice fasts. I bought my juicer soon after watching this.