Did you know you can buy organic nail polish?  I had no idea but decided to look into it today and stumbled across some great companies!  Obviously non-organic nail polish is toxic in many ways. It contains things like toluene, formaldehyde and dibutyl phthalate which can all have very negative effects on people. 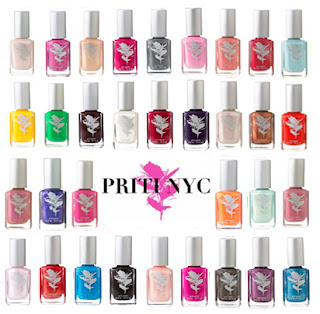 First up is Priti.   Priti polishes are completely non-toxic and safe for pregnant women.  They have a detailed list of all the ingredients that go into their nail polishes:
“Butyl Acetate – an organic compound common used as a solvent.  Colorless, soluble found in many types of fruit.  Such as red apples and used as flavoring in candy, and baked goods.  It also has the sweet smell of banana.
Ethyl Acetate – an organic compound has a pungent smell like pear drops.  It is colorless and used as a solvent.
Nitrocellulose – a long lasting film forming agent derived from cellulose.
Acetyl Tributyl Citrate – colorless non-toxic liquid used as a food adadative.
Phthalic Anhydride/Trimellitic Anhydride/Glycols Copolymer – intermediate for the synthesis of surface coating in dyes and adhesives.
Isopropyl Alcohol – the non-toxic alternative to formaldehyde
Stearalkonium Hectorite – a thickening agent to make sure all the glitter doesn’t sink to the bottom.
Adipic Acid/Fumaric Acid/Phthalic Acid/Tricyclodecane Dimethanol Copolymer – an organic compound used as a food flavorrant ingredient found in mushrooms, and lichen.
Citric Acid – obtained from citrus fruits. ” – Priti website
Wow! You can choose from 166 different shades at $12.50 each. You can even recycle your old nail polish through their website! And as if that’s not enough, they even sell soy nail polish remover.

Next is a well-known company, Zoya. I was aware of this company but had no idea they made less toxic nail polishes! At only $6 each, these nail polishes are a great option. While not completely free of toxins, they are formaldehyde, toluene & dibutyl phthalate free. Women’s Health magazine voted these nail polishes as the longest lasting! 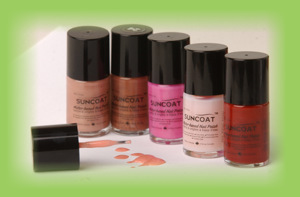 Another organic option is Suncoat.  These polishes are water-based which makes them very organic! You don’t even need polish remover, you can simply soak your fingers in hot water for a few minutes and then scrape off the nail polish to remove it. If you do want to use remover, Suncoat sells its own brand.  Suncoat nail polishes are formaldeyhyde and phthalate free. They are $9.99 each and come in many different colours. They won the Alive Award of Excellence in both 2004 and 2005 at the Canadian Natural Products Expo.