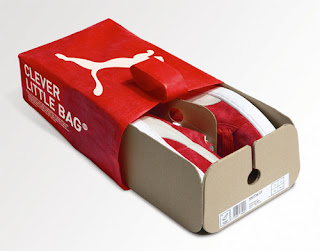 Puma has begun a 21 month long project aimed at reducing waste which has led to this amazing new shoe box concept: The “Clever Little Bag.”
It relies on 65% less cardboard and has no laminated printing or tissue paper. On top of that, it takes up less space and weighs less in shipping.  As you can see, it also eliminates the need for a plastic bag!
The environmental benefits are amazing.

“By scrapping shoe boxes and putting footwear in cardboard frames wrapped in reuseable shoe bags, it will save 8,500 tonnes of paper, cut its carbon footprint, and reduce 60pc of water and energy used during production. “

That translates to an incredible 60% reduction in water, energy, and diesel consumption per year.
This concept was created by designer Yves Behar. Puma spent 21 months developing the idea, going through over 2,000 ideas and 40+ packaging prototypes!
You’ll start seeing this boxes in stores starting in the second half of 2011. 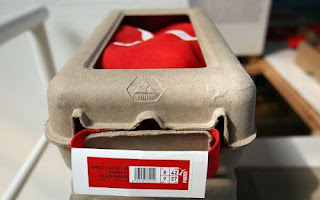